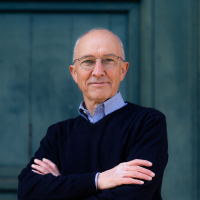 Piet got his start at the Aalst-based company Amylum in 1977 in the Nutrition Lab (formulating food with fructose, modified starches, or soluble wheat protein). Five years later, he switched to the Marketing Department, where he conducted market studies on new applications for food and non-food, and launched new raw materials on the market of what was then Western Europe.

In 1988, Piet began work at the Benelux branch of the Swiss pharmaceutical company Hoffmann-la Roche (‘Roche’) in the Vitamins and Fine Chemicals Division (carotenoids, citric acid, Omega-3 PUFAs, etc. for food, pharma, cosmetics, detergents, and plastics). He was engaged in technical and commercial activities, international key account management, legislation, scientific communication, and press relations. The Vitamin Division was acquired by DSM (Dutch State Mines) in 1999 shortly after their acquisition of Gist Brocades in Delft, the Netherlands.

Piet signed on at Flanders’ FOOD in 2011 for the implementation of the first ERDF-Interreg project ‘Food2Market’. From 2016 onwards, he would take on short-term contracts as innovation manager for TUA West (Huis van de Voeding, Roeselare), with more at Flanders’ FOOD again in 2017-18, and again from 2020 onwards.

Piet fills his free time – in the company of his wife, three sons and their wives – with folk music and brass instruments, all kinds of volunteer work, amateur forestry, and a healthy dose of sports. Despite having three grandchildren, Piet left retirement to rejoin Flanders’ FOOD during the somewhat monotonous corona period.